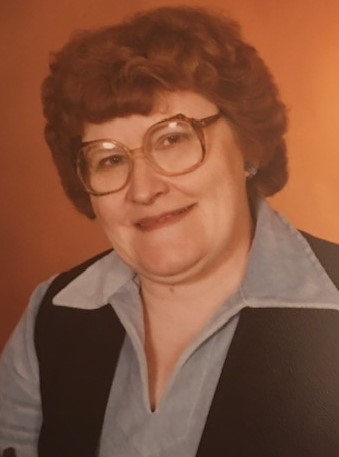 Virginia lived most of her life in Frankfort. She worked several years at the Peter Paul Candy Company, and retired from NBD in 1997.  She continued to work part time for several more years at the Paul Phillippe Resource Center.

Virginia was the daughter of Paul (Polly) and Vera (Peachie) Wainscott. She was born on August 28, 1932 at home in Frankfort.  Her parents preceded her in death as did a grandson, Brandon. Virginia was devoted to her family and she dearly loved being a big sister to Meredith (Bud) Wainscott and Diana Ross.

Virginia loved her family and enjoyed get-togethers; Thanksgiving Feasts were always a highlight of her year and Christmas Breakfast was a tradition to which she was bound.  Going out to eat was one of her favorite things, and cookouts were a special treat for her.

Virginia was famous, at least in the family, for her potato salad (in the green bowl), her red cinnamon jello stuff, and her salads consisting of various fruits and marshmallows.

Virginia was a maker of lists and an avid reader.  She loved listening to music; both Dean Martin and the Gaither Vocal Band made her smile.  She kept up with folks on Facebook and Marco Polo.  And she was always thrilled to sit and chat with family, friends, and especially, with her grandchildren.

Virginia was a gentle and gracious person who was admired for her kind and considerate ways.  She was a long-time member of Frankfort First Baptist Church, but at the time of her death had been a member of the Second Baptist Church of Greater Saint Louis for nine years.

Virginia was deeply loved and will be greatly missed.

Joe Brown Raidt, 85, of Frankfort and formerly of Indianapolis, passed away October 15, 2021 at Clinton House Rehabilitation and...