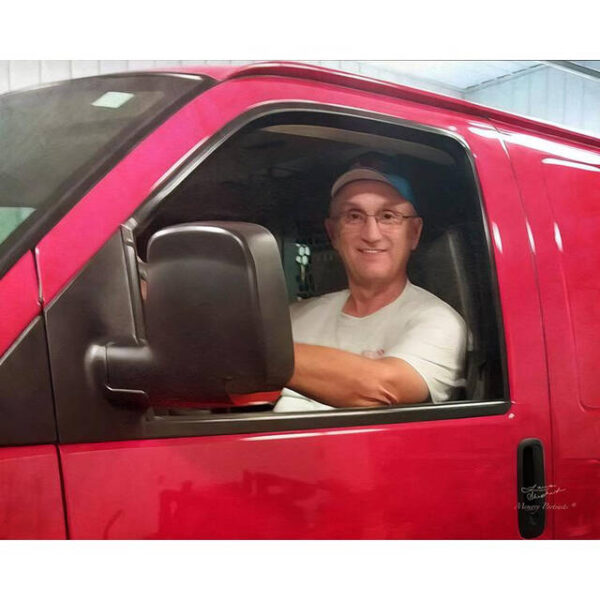 Mr. Larry Gene Malcomb, age 62, of Deputy, Indiana, entered this life on March 1, 1959 in Seymour, Indiana. He was the loving son of Roe Junior and Virginia Eleanor Cart Malcomb. He was raised in Paris Crossing and graduated from Jennings County High School in 1977. Larry later attended Ivy Tech and became a certified mechanic. He was first united in marriage to Susan Heilman and they were blessed with two daughters, Kristina and Jessica. He worked for the Canaulton Company in North Vernon as a mechanic early in life. He was united in marriage on December 18, 1987 in Gatlinburg to Darla Louise Baxter. This happy union was blessed with three sons, Allen, Eric and Donnie. He worked for the City of North Vernon for 40 years, first with the water department and then with the fire department for 36 years as an engineer. Larry always seemed to work two jobs during his working career and he owned and operated Malcomb Lock for the past 35 years. He was a member of the Locksmith Forum and was a faithful member of the North Madison Christian Church. In his spare time he enjoyed hunting, shooting, photography, reading and being with his grandchildren. Larry died on Tuesday, January 11, 2022, at 4:58 p.m. at the Schneck Medical Center in Seymour, Indiana after a battle with Covid 19 since Christmas day with his loving family at his side. Larry will be missed by his loving wife of 34 years, Darla Louise Baxter Malcomb of Deputy, Indiana; his loving daughters, Kristina Lundquist and her husband, Scott of Titusville, Florida, Jessica Sullivan and her husband, Bob of Titusville, Florida; his loving sons, Allen Malcomb and his wife, Ashley of Chattanooga, Tennessee, Eric Malcomb of Wills Point, Texas, Donnie Malcomb and his wife, Hannah of New Washington, Indiana; his adoring grandchildren, Noel Roll, Ryley Sullivan, Nathan Lundquist, Sophia Lundquist, Jake Sullivan, Lincoln Lundquist, Kennedy Malcomb, Colt Baxter Malcomb and Bonnie Malcomb; his sisters, Nancy Helt and her husband, Randy of Columbus, Indiana, Linda Smith of Dallas, Texas; his brothers, Bob Malcomb of Deputy, Indiana, Paul Malcomb of Commiskey, Indiana, Howard Malcomb and his wife, Barb of North Vernon, Indiana; his uncle and aunt, Ronnie and Janice Cart of Lakeland, Florida; his aunt, Alta Cart of Deputy, Indiana; his father in law and mother in law, Donald A. and Norma F. Baxter of Deputy, Indiana; his brother in law and sister in law, Phil and Jaqueline Baxter of Lexington, Indiana, several nieces, nephews and other relatives. He was preceded in death by his parents, Roe Junior Malcomb and Virginia Eleanor Cart Malcomb. Funeral services will be conducted Monday, January 17, 2022, at 1:30 p.m. by Bro. Bob Hicks and Bro. Robby King at the North Madison Christian Church, 1400 East State Road 62 in Madison, Indiana. Interment will follow in the Pisgah Cemetery in Deputy, Indiana. (ALL VISITATION AND FUNERAL CEREMONIES WILL BE HELD AT THE CHURCH)Friends may visit Sunday from 4:00 p.m. – 8:00 p.m. and Monday from 12:00 Noon until the time of service at the North Madison Christian Church, 1400 East State Road 62 in Madison, Indiana. A flag presentation by the North Vernon Fire Department will be held at the Pisgah Cemetery. Memorial contributions may be made to the Jefferson County Animal Shelter or the North Madison Christian Church. Cards are available at the Morgan &Nay Funeral Centres of Madison and Hanover. Online condolences, remembrances and memorials can be left at www.morgan-nay.com

HOPE On the morning of January 22, 2022, C. Stanley Embry passed to his eternal Home. Stanley was born in...